Fatimid Bronze Figurine of a Woman Playing a Tamborine. 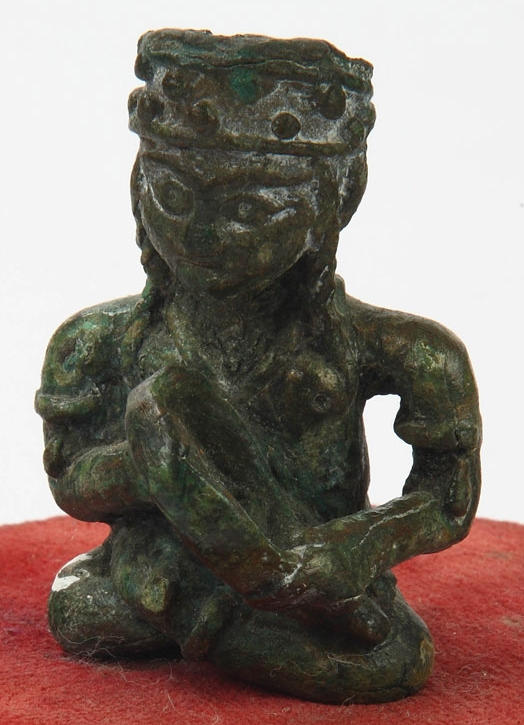 The representation of princely pleasures was a recurrent theme in the Islamic world, from Spain to Iran. Along with dancing, drinking, and hunting, this iconography of worldly pleasures also comprised music. According to historic sources, music was cultivated and encouraged by most of the Fatimid caliphs, and was played on a number of occasions: during military fanfares, after hunting, and during private festivities. As entertainment for high society, these festivities involved the performances of female dancers, singers, and instrumentalists. This little figurine of a musician discovered in the Fustāt dig needs to be seen in the context of this musical culture.

The young woman is sitting in the lotus position, and is wearing two bracelets and a headdress with large studs. Her almond eyes and long hair, falling either side of her face, echo Iranian models, but these features were, in fact, common in Mediterranean representations. She is holding a tambourine, an instrument that existed already in Pharaonic Egypt and was very common in the Middle Ages throughout the Mediterranean world, both in the East[1] and the West[2]. Caliph al-Mustansir (reigned 10361094), a great music lover, made a gift of a residence along the Nile (the domain of the female tambourine players) to one of his favourites.

Musicians were represented in many materials: jewels in precious metals[3], lustred ceramics[4], and textiles. The statuette in the Museum of Cairo is one of the rare three-dimensional figures produced in the Islamic world. Other bronze examples were made in Fatimid Egypt, some of which are very small, like this musician. They could be a simple decoration, or have a specific purpose, for example, as the handle on a tap[5] or a grip on a lid. However, like three-dimensional Andalusian sculptures, those produced during the Fatimid era were very often animals. Sometimes human statuettes can be seen in the Iranian world, like the stucco heads in the David Sammling collection, or in the Louvre Museum[6]. Small or large three-dimensional sculptures, in bronze or in stonea continuation of the classical traditionswere very common in European art.

[5] Fragment of a tap in the shape of a lion surmounted with a peacock, the eleventh century (Egypt or Syria), bronze, the al-Sabah collection, Dar al-Athar al-Isla miyyah, Kuwait, LNS 166 M. (Fatimid treasures of Cairo, No. 47 p. 120)


31. Fatimid metal figurine of a woman playing a tamborine or flat drum with a jewel-studded kūfiyya on her head (Museum of Islamic Art, Cairo, no. 6983).

Another ornate cap similar to the ṭāqiyya worn by women as well as men was the kūfiyya. From the descriptions given in the Thousand and One Nights, it was certainly far more ornate than an ordinary cap and seems to correspond more to the kūfiyya worn by women today in Tunisia and Algeria. That is, it was a close fitting cap, often richly embroidered, with flowing ribbons or a scarf hanging down, and studded with semi-precious and even precious stones (see PL 31). Though not frequently mentioned, the kūfiyya already appears in Geniza trousseaux from the late Fatimid and early Ayyubid periods.
Source: Fig. 31, Arab Dress. From the dawn of Islam to Modern times by Smirna Si